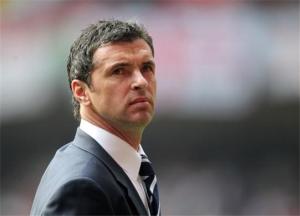 Gary Speed was one of the most durable footballers in the modern British game – over a 22 year career he played 677 games for five different clubs (Leeds, Everton, Newcastle, Bolton and Sheffield United) and is currently third in the all time Premier League appearances list behind David James and Ryan Giggs.  Starting out as a left-winger, but developing into a versatile midfielder capable of filling many roles, Speed played a big part in Leeds’ title win in 1991/2 and helped Newcastle make consecutive FA Cup Finals in the late 1990s.  As a proud Welshman, he represented his country 85 times as a player and after he had retired, went on to manage the national side.  After a tough start, Speed led Wales to four wins in their last five games, and up to 45th place in the latest FIFA Rankings.  He had also become a respected pundit on the BBC, appearing as recently as Saturday to give his viewpoints on the weekend’s action.  One day later, Gary Speed was dead – having taken his own life on Sunday morning.

Speed was in my extended family – his mum and my dad are cousins – so I had always followed his career closely and rooted for him to succeed, except when he played against Tottenham.  In 1994, when Leeds United were drawn away at Oxford United – my hometown team – in the FA Cup, Gary was kind enough to get tickets for my Dad and myself.  Having found themselves 2-0 down to the lower division team, the visitors forced a replay in part thanks to a cracking goal from Speed.  I saw him play against Spurs several times during his career – for a while he had a knack of scoring crucial goals against us – but he was an opponent that the home fans always admired.  He was a hard-working footballer and always played the game with respect and fairly, relying on his talent rather than ever resorting to dirty play or cheating.  As a boyhood Everton fan, it was a surprise when he engineered a move away from the club in 1998, having been bought by the Toffees two years before.  Speed signed a confidentiality agreement about his departure, and adhered to that, never giving his reason for leaving the team he supported (other players from that side have suggested that as captain, Gary had been forced to give a half-time team talk as the manager was intoxicated and unable to do so).  That summed up how he came across as a footballer and as a person – honest and principled.  After his playing days were over, Speed ran the 2010 London Marathon for the Sir Bobby Robson Foundation, in honour of his former manager at Newcastle United.  As the cousin who had made it as a professional footballer, he, of course, also beat my best marathon time by half an hour, finishing in a very respectable 3hrs and 49 minutes.

Losing a loved one is never easy – when it is by suicide, the death is almost impossible to handle.  How does someone come to terms with their husband or wife, son or daughter, father or mother, taking their own life?  It naturally brings up feelings of anger towards the deceased – resentment that they have taken an “easy way out”, or that they acted selfishly and not considered those they are leaving behind.  In trying to understand the act, people will feel guilty that they had not been able to prevent it from happening.  Suicide is also the most frustrating death – because you can think that it was completely avoidable.  Had the person not taken that action, they would still be alive.  All of these emotions are completely understandable, but unfortunately it is not that simple – suicide is the end result of a much deeper problem.  The despair that a person must feel in order to reach that point is something that is impossible to comprehend by those who have not experienced severe depression.  When someone kills themselves, people want to know the reason – especially if the victim had shown not outward signs of depression, or seemingly had a very happy life.  But the real issue is not the outward reason, be it financial difficulties, relationship issues, or whatever society can point to in order to define a cause for the suicide.  What we should be trying to understand are the chemical imbalances in people’s brains which make them susceptible to such drastic action.  Mental illness has a stigma attached to it, in a way that physical ones do not, and because of this, those who suffer from them feel they have no way of overcoming them.

I do not know if Gary Speed suffered from depression, or if there were any driving factors that led him to suicide.  What I do know, is that he must have felt there was no other option.  He was wrong.  Tragically wrong.  There is always another option – as a society we need to make that more known to people who are considering taking their own lives.  For some reason, Speed did not see any choice and now his wife is left a widow, his sons have lost their father, and his parents try to deal with the death of their son.  My thoughts go out to them at this impossibly difficult time, and I hope that Gary now rests in peace.

10 thoughts on “A Tribute to Gary Speed”