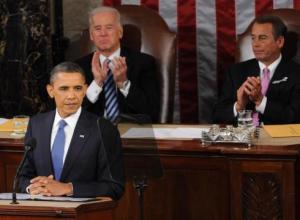 President Obama addressed a joint session of Congress on Tuesday evening to deliver the State of the Union address for the third (and potentially final) time. He focused on jobs; all through the speech he made references to programs and bills he wanted Congress to enact in order to continue the recovery and build an “economy to last”.

The address was bracketed by the Commander-in-Chief giving praise to the military, and referencing the assassination of Osama Bin Laden last year. President Obama highlighted that, thanks to the brave men and women in uniform, for the first time in 9 years there were no troops fighting in Iraq and, for unlike the previous two decades, the former leader of Al Qaeda was no longer a threat the United States of America. As well as the SNL skit mantra of “I got Osama”, the President also focused on the importance of helping veterans returning home in finding jobs and being given opportunities as they were after the Second World War. To do this, he wants Congress to approve tax breaks for companies hiring those who are returning to work having served their country in the military – and this need for hiring incentives was a recurring theme in the speech. President Obama stated that legislation was needed to encourage manufacturing and high-tech companies to employ people in the United States, rather than overseas; that those who outsourced jobs and profits to other countries should no longer receive tax breaks for doing so; and corporations should be enabled to set up training programs with community colleges to retrain people who are looking for work and then hire them.

The President also talked about the path that got the country into the financial crisis – the growing income inequality between the richest and everyone else; banks and mortgage lenders taking advantage of the lack of regulation to take risks with other people’s money; and a decline in the manufacturing industry. Obama pointed out that in the six months before he took office, 4 million jobs were lost – then the same number again before the policies he put in place took effect. In the 22 months since then he stated, 3.2 million jobs have been added and for the first time since the 1990s, American manufacturers were hiring again. President Obama talked about the success of the Auto Industry that was in sharp decline when he came to power, with many people suggesting he should have let it fail. Since his administration had “bet on American workers”, the big three car companies had turned their businesses around, making themselves more efficient and innovative, resulting in Chrysler and Ford growing and investing, while General Motors is once again the largest car manufacturer in the world (they overtook Toyota last year).

As the Republican Presidential candidates have been going out of their way to portray him as a job-killing President, Obama hammered home this record and his ideas on how to continue the recovery. He pointed to his trade agreements with Panama, Colombia and South Korea that have helped increase US exports – and that now American made cars could be found on the streets of Seoul. Also, he wants tax breaks for companies who set up their businesses in the United States, in particular cities that have suffered most in terms of job losses. The President criticised China for the extensive piracy of American products and the huge subsidies they give their industries which makes trade unfair – and he argued that American efficiency and ingenuity could get the country back on top. With a level playing field, Obama claimed, America would always come out on top.

On education, President Obama told Congress it was time for schools to be empowered to be able to keep the best teachers and that students need to stop being taught just to pass tests – it has to be all round development. He requested that all states pass legislation that children must remain in school until they graduate, or turn 18, in order to encourage participation in learning and not giving them an easy way out. The President also spoke on higher education and the importance of preventing student loan rates from doubling this summer, while also encouraging colleges and universities to control their tuition fees.

The issue of immigration, always a hot topic in an election year, was addressed by the President who stated that more boots on the border has drastically reduced the number of illegal crossings compared to under the previous administration – he did not say whether that was the border with Mexico or Canada. With the reduction of the number of people coming to the country without proper documentation, Obama argued it was time to build a path to citizenship for those who were brought here at a young age and are Americans through and through – it will come as no surprise to learn that this did not generate a standing ovation from the Republicans. In fact, the only things they did stand and applaud was the military and, somewhat bizarrely, the President’s statement that on energy policy they needed to pursue an “all of the above” strategy. He talked about the importance of harvesting the nation’s natural gas resources, increasing offshore drilling (urgh), as well as investing in new energy sources. With a non-too-subtle reference to the criticism he has been getting over Solyndra’s failure, the President insisted they needed to continue putting money into companies that were researching renewable sources of energy that would reduce the dependence on oil.

With regard to regulations – which, in their debates, the GOP have been demonising as being against the free market and a single rule placed on a corporation kills every job in the economy – President Obama stated that while some rules were antiquated and unnecessary, he would not allow Wall Street to return to their reckless ways; Oil Companies to risk more spills like the one in the Gulf two years ago, or health insurance companies to cancel people’s coverage or charge women more than men. The President pointed out that during the Great Depression, the Golden Gate Bridge and Hoover Dam were built, and after World War II the Interstate Highway System was created – investment in such initiatives creates jobs and provides lasting utility. After he signs an executive order to remove the red tape, Obama asked that Congress used half the money that was no longer being spent on wars to fund infrastructure projects to rebuild the country, with the remaining 50% being for deficit reduction.

The President did acknowledge that people who were watching the speech would be thinking that despite all the grandiose plans, there was little chance that anything would be done in Washington this year. Or next year. Or the year after that. Obama said it was time to stop playing politics with the recovery and, even in an election year, work on making progress – even if the two sides could not resolve their major philosophical differences. He pointed out that the greatest blow to the American economy last year came from something that they had control over – the disagreement over extending the debt ceiling to pay the country’s bills, the stalling of which resulted in a downgrade of the US debt rating. President Obama talked about the divide between D.C. and the rest of the country and that financing in Washington was a major cause of that. He argued that new laws were needed to prevent insider trading by members of Congress, and that they should not be allowed to own stocks in companies they are able to impact through legislation. In trying to encourage bipartisanship, the President cited Abraham Lincoln, a Republican (though calling him that is like pointing out he did not have an iPhone – if he was alive today, the Great Emancipator would be a Democrat – times have changed) who said that “Government should only do for people what they cannot do better by themselves”. Of course, to Republicans, that means that the Government should do nothing except have a kick-ass military – and even then the people would be armed would automatic weapons.

Taxation will always be a divide between the two parties, and President Obama did not back down from the Democrat view that those earning the highest salary should be asked to pay their fair share, while the 98% of people should not have the amount they contribute go up by the expiration of the Payroll tax deduction. The President pointed out that the Bush-era tax cuts – that were supposed to be a temporary measure – were now going to add a further $1tn to the deficit if they were not allowed to expire. It was unfair, he argued, that billionaire Warren Buffet pays a lower rate of tax than his secretary, because of the breaks and subsidies that are given to the wealthiest Americans. President Obama said he expected the Republicans to call this class warfare, but he believes the people would see it as plain old common sense.

To conclude, the President said that, if they worked together, there was nothing that America could not do – they had taken down Al Qaeda operatives; had weakened the Taliban; initiated the Arab Spring; always stand against violence and tyranny was no match for liberty. Wait – initiated the Arab Spring? I guess Facebook and Twitter were invented in the US so they can take some credit for the organisation of it…anyway…back to the bravado. Obama stated Iran would not be able to obtain a nuclear weapon and that while diplomacy and peaceful solutions were the main avenue they were pursuing “no options were off the table”. At the same time, America had strengthened its ties with allies in Europe, Asia and the Americas, remains an “iron-clad” defender of Israel, and is the one indispensable nation in world affairs. The chest bumping done with, President Obama repeated his assertion that if they worked together, anything was possible and “the State of the Union will always be strong” – nice tactic, get the name of the speech into the speech.

Overall, the President focused on jobs and Congress actually doing something to help the recovery rather than being obstructionist. It is unlikely to have any effect, but Obama did a good job of putting his record and views on the table, in contrast to the ones projected on to him during the Republican debates. There is a sense that he wants to tell Congress to stop being dickish and actually do what they were elected to do, but tries to frame it in a nicer way. If it works and he wins reelection and the Democrats are able to regain control of the House, he needs to follow through on his lofty speeches with action, unlike the first two years of his administration when the President tried to be too conciliatory with the GOP.