Although this iconic anthem of Dylan’s was warning people of the changing times two years before the setting of the current season of Mad Men, it is only now that the main characters are beginning to realise that they’re in danger of being replaced by the younger generation.  Betty feels that she has been replaced by Megan; Roger by Pete Campbell; and the old Sterling Cooper with the more diverse and modern agency of SCDP. 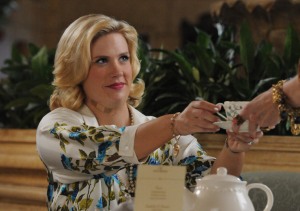 The main focus of this episode – which marked the directorial debut of John Hamm – was Don’s ex-wife, Betty, who was absent from the two-hour premiere last week but returns to the show much heavier than the last time we saw her.  The writers were working around January Jones’ pregnancy with this storyline – but there were hints of her frustration at the end of last season when Betty tells Don that life with her new husband, Henry Francis, was not perfect.  Once the glamorous wife of Don Draper, envied by those around her in their quite suburban neighbourhood, now Betty is being given advice by her mother-in-law about diet pills.  When her trip to the doctor brings two shocking revelations to Betty – that there is a tumour on her thyroid, and her classification now is that of a “middle-aged woman” – she goes into a tailspin of panic.  With Henry not home when Betty gets back from the doctor, she calls Don who is the only person who knows what she wants to hear, that everything is going to be okay.  Her new husband only utters those words to her once the diagnosis comes back as benign, which does not calm Betty, rather has her return to focusing on her weight gain.  Henry, who replaced Don, is obviously still concerned about those roles being reversed again, as he is surprised that Betty had called her ex-husband about her health scare, and then tells his wife that there was noone on the phone when Don calls to check on her well-being.

Before being told that the tumour was not cancerous, Betty had been her tea leaves read by a woman who says that she has a great soul and is a rock, which is completely counter to how Betty feels.  She has a dream imagining her family in mourning after her death, with her mother-in-law taking her place as cook for the family, and, in the waking world, Betty is openly jealous of Megan – who she first describes as being Don’s girlfriend, and then as 20-years-old (when we learn later in the episode she is 26).  The final scene sees Betty sharing a moment with her daughter, Sally, with whom she has had an antagonistic relationship over the series.  However, this was not her seizing the day and trying to form a closer bond with Sally, rather it was an opportunity for Betty to feed her depression with her daughter’s leftover ice cream.

At the agency, Roger Sterling and Pete Campbell’s power struggle continues on.  Roger believes he still has influence when Pete tells him that their returning client, Mohawk Airlines, will be his.  Sterling assumes this is because of his relationship with the guys from Mohawk, and his knowledge of their drink orders, whereas in fact it is part of Campbell’s plan to stamp his authority, if not his name, on the agency.  When Pete is announcing that Mohawk is on board with Sterling Cooper Draper Pryce, he takes all of the plaudits, and reassures the staff that, even though they will be Roger’s client, they need not worry as he will be micro-managing his elder partner.  Roger laments to Don “When is everything going to get back to normal”, not wanting to accept that the changes are permanent, not temporary.

Meanwhile, the forced integration of the SCDP offices that was suggested at the end of last week’s episode, has happened – with Don’s new secretary being African-American homonym, Dawn – and continues with the hiring of the agency’s first Jewish staff member, Michael Ginsburg, the new copywriter for the Mohawk account.  Peggy is given the responsibility of finding this new recruit, and is relied upon as a confidant by Roger during the process, showing that Sterling Cooper Draper Pryce do allow women to progress when they are exceptionally talented, as she and Joan both are.  It does not stop Peggy being affected by the sexism of others though – Mohawk only want a copywriter “with a penis”, according to Roger, so she cannot hire another woman for the role, nor even consider a candidate whose name is gender ambiguous.

Don is the person most aware of the generational shift that is occurring, though he is still trying to find his place within the new world.  When he takes the main man from Heinz out for dinner with his wife and Megan, Don realises that the client’s suggestion of getting the Rolling Stones to record a jingle for their baked beans commercial is unlikely, but he still accompanies Harry Crane – who he openly dislikes – to a concert to attempt to sign them up.  In a conversation backstage with a very young girl – who is flirtatious with him, but only because she thinks he can help her meet Brian Jones – Don states he thinks they have a chance of convincing the band to do the song as they did one for cereal in the UK 3 years before, failing to recognise that the Rolling Stones of 1963 were in a much different place than in 1966 and would not consider doing any more advertising jingles.

It does seem that Don is accepting his limitations – he does not accept the offer of a joint from the girls at the concert (he has smoked it before with his former artist lover in the village), nor is he drinking heavily – yet he still wakes up feeling rough due to his aging body.  Megan does not allow Don to succumb to his tiredness and insists he accompanies her to Fire Island to see her friends, but just waiting for The Rolling Stones now makes him feel worse than the all-nighter he pulled in last season’s The Suitcase, when a fresh shirt and a washed face made him ready for work.  In earlier seasons, a drunk and stoned Don may well have helped Harry with the 20 mini-burgers he picked up on the way home from the concert, now he is sober and appalled with how many Crane has devoured.

One thing that does not change in Mad Men is the humour in the show.  This week, there was the new copywriter, Michael Ginsburg, dismissing Peggy’s praise of his portfolio by stating that “They said that about “Mein Kampf – the boy really has a voice”.  Also, and this was my favourite line on the show, Henry, who used to work for Governor Rockefeller, but now is part of New York City Mayor Lindsay’s staff, takes a call about his boss going to see the Governor of Michigan but he dismisses the idea saying that he does not want him “Standing next to Romney, he’s a clown”.  Matthew Weiner was on Bill Maher’s show last week and made no secret of his politics, so this little jibe about the presumed Republican Presidential Nominee, Mitt Romney’s, father was a funny aside.