It was status quo in the title race last weekend, as Manchester City won 2-0 at Newcastle, while United recorded the same scoreline in their home victory over Swansea.  Mancini’s side had to work hard for their win, with their opponents still in the hunt for a top four finish, and it was not until the 70th minute that they finally made the breakthrough with a goal from YaYa Toure.  Sir Alex Ferguson sent his team out knowing that they would need to record a big victory over Swansea to have any chance of overhauling the goal difference between themselves and their rivals – which currently sits at 8 – but the team from South Wales were able to restrict United to just the 2-0 win.  Should City beat Queens Park Rangers at the Etihad this weekend, then they will achieve their first league title since 1968 and get one over on their neighbours. 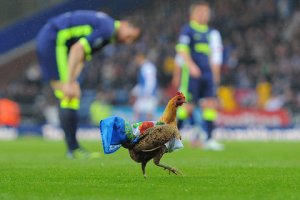 Blackburn’s relegation to the Championship was confirmed on Monday with a 1-0 defeat against Wigan at Ewood Park.  The home fans continued their (season long) chants for manager Steve Kean to be sacked, but added two more protests to their repertoire for this game.  A chicken was released onto the pitch bearing the message “Venkys Out” – Venkys being the poultry company that currently owns Blackburn – and the bird had to be caught by Yakubu and Ali Al Habsi; then a Rovers’ fan ran out of the stands and threw his season ticket to the ground.  That latter act of defiance was common place at White Hart Lane during the years I was regularly going to games – but fans who chose to show their displeasure in that manner always waited until the final home game of the season – meaning that all they were doing was throwing their season tickets onto the pitch instead of into the bin as they left the stadium.

The league season is often said to be a marathon and not a sprint – if that is the case then, while the Manchester clubs have been the elite athletes setting the pace, the sides who are battling for third and fourth place – Arsenal, Spurs, Newcastle and Chelsea – have been the amateurs in the middle of the pack who stumble through the final few miles, begging for the finish line.  Arsenal’s 3-3 draw with Norwich means they have won just one of their last seven league games – although that victory was, bizarrely, over the presumptive champions, Manchester City.  Tottenham are like the person who decides to run the 26.2 miles whilst juggling – they always seem to make it unnecessarily hard for themselves.  At the weekend, they dominated the first half against a woeful Aston Villa side, yet shortly after the interval they found themselves both a goal and a man down.  A penalty earned Spurs a point, but they will now need to win their game against Fulham on Sunday, then hope for either Arsenal to slip up against West Brom, or Chelsea to lose in their final against Bayern München, if they are to return to the Champions League next season.  Newcastle’s loss against Manchester City means they too will need help from elsewhere to sneak into Europe’s top club competition in August, but they still have an outside shot at finishing third.  Chelsea won the FA Cup for the fourth time in six years by beating Liverpool 2-1 at Wembley on Saturday, but then fell to a 4-1 defeat against the same opposition in the league on Tuesday night.  That loss means, regardless of their result against Blackburn on Sunday, Chelsea will finish the season in 6th place and will be in the Europa League next season, unless they win in Munich on May 19th.

With the title, European places and relegation battles still to be decided this weekend, here is a rundown of the fixtures with a breakdown of what is at stake for each club.

Chelsea know they will finish sixth – so their minds will be on their Champions League final next week – and Blackburn’s relegation is already confirmed – so their fans will focus on calling for Steve Kean to be sacked, as they have for most of the season.  This will be an irrelevant and unwatchable game, let’s just move on. Prediction: Home win – because Blackburn are not even good enough to beat Chelsea’s reserve side.

Newcastle are guaranteed European football next season, the only question is which competition they will be playing in.  A draw or defeat will leave Pardew’s side in 5th spot, but a win could move them above Spurs – should they fail to beat Fulham – and Arsenal – if they lose to West Brom.  Everton are only playing for pride, but a win would ensure they finish above their Meseryside rivals, Liverpool.  Prediction:  Draw.

If this game was being played on any other weekend of the season, it would look like a definite home win.  Manchester City are three points away from the title, while QPR have been fighting for their lives at the wrong end of the table all year.  This fixture has the added spice of Mark Hughes returning to the club who sacked him three years ago, with the opportunity of preventing them from winning the league.  The main focus for Hughes will be ensuring his current side avoid relegation, and Rangers can guarantee Premiership survival with a win or draw.  Should they lose and Bolton get all three points at Stoke, QPR will be relegated back to the Championship after just one year in the top flight.  City secure the league title with a win, anything else would leave them relying on Manchester United slipping up at Sunderland. Prediction: Home win

Technically, Villa do need another point to ensure they cannot drop into the relegation zone on the final day of the season, but that would require them losing and Bolton winning by a combined 17 goals, so they are all but safe – despite their woeful form.  Norwich have performed well to be so clear of the drop, as two seasons ago they were plying their trade in League One, before back-to-back promotions got them back into the Premiership.  Prediction – Home win, but not by enough to put Villa in danger.

Heading in to the final minute of the games last Sunday, Bolton were leading 2-1 against West Brom, while QPR were being held 0-0 at home to Stoke – results which would have left Wanderers 2 points above Rangers.  However, an equaliser from Albion and a late winner by Djibril Cisse reversed the situation, leaving Bolton needing to win at Stoke and hope that QPR do not pick up an unexpected win or draw at Manchester City.  Owen Coyle’s side will like their chances in this match, since Stoke have nothing to play for and lost to Wigan last season on the final day to help them stay up.  Prediction: Draw – Bolton to be relegated.

Nothing to play for in this game, save for Liverpool trying to finish the season above Everton in the league.  They will have European football to look forward to in 2012/13, as winning the Carling Cup has earned them a spot in the Europa League.  Swansea have impressed many with their performances this year, but have their form has dipped in the last few weeks with nothing at stake.  Prediction: Away win that few people will watch, or care about outside of Liverpool.

Martin Jol returns to the club he took to within a dodgy lasagna of qualifying for the Champions League back in the 2005/06 season with the opportunity to deny them the chance of finishing in the top four again this year.  I stopped writing about Tottenham around the same time as they started winning again, so I’m not going to change my habit now.  Needless to say, should we finish fourth, put all of your money on Chelsea being victorious in Munich the following week.  Prediction: Draw – 1-1 with Spurs having about 130 shots at goal to Fulham’s 2.  I’m not really writing about them since I’m putting this in italics, but against Villa last week we had 19 corners.  NINETEEN!  Why do we never score from them? Other teams seem to score through set pieces all the time but Tottenham – it’s like we don’t even practice them.  Still, I’m definitely not talking about them…

Arsenal will end an up-and-down season in third place – and guaranteed a place in the Champions League qualifiers at least – with a victory on Sunday over a West Brom side who have nothing left to play for.  However, as noted above, the Gunners have won just one of their last seven in the Premiership and were held to a 3-3 draw in their final home game against Norwich last weekend.  Arsene Wenger’s men have also been unable to register a single win in the league without Mikel Arteta in their starting lineup and the Spaniard – recruited from Everton at the end of the August transfer window – is unavailable again for this fixture due to injury.  The scenarios for Arsenal are as follows: win – they finish third; draw they will finish above Newcastle and can drop no lower than fourth, they would finish third if Spurs failed to beat Fulham; lose – and they can be overtaken by both clubs.  A two goal defeat for the Gunners would allow Tottenham to overtake them on goal difference with a draw against Fulham.  Albion will be playing their last game under manager Roy Hodgson who is off to bigger and better things.  Prediction: Arsenal win – but would not surprise me if they lost by one goal, Spurs draw and finish below them for the 542nd consecutive season but only on goals scored.

Wolves – Highest possible finish: 20th/bottom/lowest of the low/should be demoted two divisions they are so bad

In the last three months, Wigan have put together an impressive run of performances that have lifted them clear of the relegation zone and assured of another season in the Premiership, despite having looked dead and buried at the end of January.  Their last seven games have been particularly impressive: Liverpool away – won 2-1;  Stoke home – won 2-0;  Chelsea away – lost 2-1 (both of the goals they conceded were offside); Manchester United home – won 1-0; Arsenal away – won 2-1; Fulham away – lost 2-1 (last-minute winner); Newcastle home – won 4-0; Blackburn away – won 1-0.  This excellent form has not only gained their manager Roberto Martinez many plaudits, it also means Wigan remain the only club in history to never have been demoted from the top flight of English football (Arsenal have the longest run, since 1919, but were relegated in 1912/13).

I will be doing a running diary of the final day madness – with all of the games being televised in the US on one channel or another.

2 thoughts on “This week in: English Football – The Final Day of the Premiership Season”