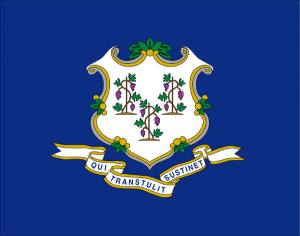 (He who transplanted sustains)

Connecticut was originally the home of the Mohegan tribe of Native Americans, while the name of the state itself comes from the Algonquian word quinatucquet, meaning “upon the long river”.  Although the Dutch and the English did setup colonies in the region, the majority of the new population were a group of Puritans, headed by Thomas Hooker, who came from Massachusetts.  Initially, its land stretched all the way across to what is now Ohio, but now Connecticut is the third smallest state of the union and its population – just over 3.5 million – ranks 29th in the country.  As the colony had been relatively autonomous prior to the Revolution, Connecticut’s government did not change when independence was achieved.

The state became one of the world leaders in the manufacturing of machine tools and advances in industrial technology, so when the Civil War broke out, Connecticut was a principal supplier of weapons and ammunition to the Union army and navy.  This trend continued into the twentieth century and the world’s first nuclear-powered submarine was built in the state and the manufacture of vehicles, heavy industrial machinery, aircraft parts and scientific instruments is still a major part of the state’s economy.  Alongside this, Connecticut also gains a lot of income from tourism, entertainment – ESPN is located in Bristol, while casino gambling has also been successful – and finance, with a lot of Hedge Funds having their offices in the state.

New Haven is the home of Yale Univeristy, which was established in 1701, making it the third oldest in the United States (after Harvard and William & Mary).  Connecticut used to have one “Big Four” sports team, the Hartford Whalers of the National Hockey League, but they relocated to North Carolina in 1997.  Connecticut was the birthplace of the 43rd President – George W. Bush – and also of the Revolutionary War traitor, Benedict Arnold.  If those claims to fame are somewhat dubious, the state was one of only two that did not ratify the Eighteenth Amendment, which introduced Prohibition.

Connecticut has voted for the Democratic candidate in each of the last five Presidential elections and it is all but certain that they will make it six in a row in November.

Congress: After four terms, Senator Joe Lieberman is retiring and not seeking re-election.  The former Democratic Vice-Presidential candidate has been an Independent since losing in the Primary in 2006 and the Senate seat is now a toss-up between Chris Murphy (D) and Linda McMahon (R).

Connecticut sends 5 Representatives to the House and currently the whole delegation is made up of Democrats.  That is likely to continue after this election – only Rep. Elizabeth Esty in the 5th district is in a close race, but she is still favoured to win.

One thought on “50 States in 50 Days Election Preview: 5. Connecticut”