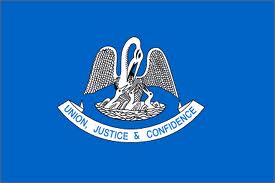 Before the arrival of European settlers, Louisiana was inhabited by several different Native American tribes, including the Akatapa, Bayougoula and Houma.  The first explorers from the Old World to find the mouth of the Mississippi River were Spanish, but it was the French who initiated a colony in the area.  In 1682, Robert Cavelier de La Salle named the new territory in honour of King Louis XIV and France claimed land on both sides of the Mississippi, stretching all the way north to parts of Canada they also had control over.    Following the Seven Years’ War, in 1763 the French had lost control of the area east of the Mississippi to the British, and had ceded control of Louisiana to the Spanish, but Napoleon reacquired the territory in 1800.  In 1803, after he had failed to re-enslave Haiti, forcing him to abandon his aim for a French Empire in the New World, Napoleon decided to sell all of the land to the United States, which would also help fund his ongoing war against Britain.  President Jefferson had sent Robert Livingston to Paris in order to buy New Orleans for up to $10 million, but when he was offered the entire territory for $15 million, Livingston assumed that it would be agreeable to the leaders back in America, and agreed the Louisiana Purchase.  There was opposition in Washington D.C. from those who said the land was a worthless desert and questioned the constitutionality of such an acquisition, but the vote passed the House of Representatives by two votes, 59-57, and the Senate in October, 1803.  On April 30th 1812, Louisiana – which up until that point had been part of Orleans Territory, became the 18th state of the Union.  The Battle of New Orleans was the final major skirmish in the War of 1812, with the American forces being led to a decisive victory by Andrew Jackson, who would later become the 7th President of the United States.

Many people were brought to Louisiana as slaves from the regions of Africa that now make up Senegal, the Gambia, Angola, Benin and Cote D’Ivoire and, by 1860, just under half of the people in Louisiana were slaves – most of whom worked on the plantations that were the foundation of the state’s economy.  It also had one of the largest populations of free African-Americans in the United States, most of whom lived around New Orleans.  In 1861, Louisiana seceded from the Union and joined the Confederacy but, little more than a year later, it was captured by the Union, who had focused on gaining control of the Mississippi River.  As with all of the other Southern states, following the Civil War there was continued discrimination against African-Americans, through disenfranchisement, via obstructionist measures like poll taxes, and they faced segregation in public facilities –  which was made legal by a Supreme Court case, Plessy vs Ferguson, that had started as a lawsuit in Louisiana.  Following the Civil Rights Movement in the 1960s, participation in political life increased in the state and Earnest Nathan Morial became the first African-American Mayor of New Orleans in 1978.

Modern day Louisiana is known for its rich culture, music and food, enhanced by the diversity of people who have inhabited the region through the centuries: Native Americans; the French, whose language is still spoken by 7% of the population; the Spanish and people from the Canary Islands who moved there during the last quarter of the 18th century and who brought their Isleño culture; Haitians, with around 1,300 escaping the revolution on their home island in the early 1800s; and Africans – most of whom were brought over as slaves, but some moved there as free people.  New Orleans in particular is noted for its cuisine -with both Creole and Cajun influences – and for its part in the development of jazz and blues music.

The area has also suffered greatly through natural and man-made disasters in the past decade – most notable, Hurricane Katrina in 2005, and the Deepwater BP oil spill in 2010, which had a huge negative impact on two of the biggest industries in Louisiana, fishing and tourism.  Following Katrina, the New Orleans Saints were forced to relocate for the 2005 NFL season but, a little more than four years later, they won their first Superbowl against the Indianapolis Colts.  The only other “Big Four” sports team in the state is the New Orleans Hornets (NBA).  It is the 31st largest state, ranks 25th in population, with just over 4.5 million residents, and to date, no US President has been born there.  Louisiana is the only state that does not have counties, instead being divided into parishes.

2008 was the first Presidential election since 1968 in which the winning candidate did not carry Louisiana, as Senator McCain won the state by a wide margin.  However, the two Democratic candidates who have won the state in the last 50 years both hailed from the south (Clinton, from Arkansas, and Carter, who was from Georgia) and it would be a surprise if President Obama were to emerge victorious there in November.  Romney’s lead in the polls of just 6% (45:39) is less than Obama’s advantage in some states that are still considered to be in play, so if he were to gain momentum in the last few weeks of the campaign, it is still possible Louisiana could go blue in 2012.

Congress: There is no Senate election in Louisiana this November.  After redistricting from the 2010 census, Louisiana is losing a seat in the House of Representatives, reducing its total to 6.  Currently, the GOP have six members of the state’s delegation to the Democratic Party’s one – it is expected that following the election, that ratio will be 5:1.