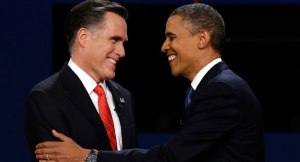 On Wednesday, President Barack Obama squared off against his Republican opponent, Governor Mitt Romney, in their first debate prior to the November election.  While these contests are not often decisive, they can help a candidate make an impact and give their campaign momentum.  With the President leading the polls in the majority of the swing states, Romney had the most to gain with this encounter and the consensus was that he came out on top.  This was what we learned from last night:

The race is between right-wing and centre-right

It should be no surprise that an American Presidential contest should be between two candidates who are to the right of centre, given that neither party represents left-wing views.  There is only one person in Congress – Senator Bernie Sanders – who is comfortable with the moniker of “socialist” and yesterday’s debate provided more evidence that only conservative policies were on the table.  On the economy, both Obama and Romney referred to their desire of cutting the corporate tax rate and the only ideas that involved the wealthiest Americans paying more, was the President’s plan to end some deductions, such as those given for private jets.  The GOP candidate claimed that the rate of growth of the economy would be quelled by an increase in tax rates, yet advocated slashing spending which would have the same impact.  At that point, President Obama should have talked about the most successful economic recovery the country has made – achieved by President Franklin D. Roosevelt’s New Deal that dragged the US out of the Great Depression –  and that, in 2009, the Democrats own plan for an expansive stimulus package was lampooned by the threat of a Republican filibuster in the Senate, eventually passing something that only succeeding in preventing the situation from getting worse.

When the conversation moved to healthcare, Governor Romney derided his opponent for having passed his Affordable Care Act without any Republican support and claimed that the costs associated with it prevented small businesses from hiring people.  If President Obama had been willing to move to his left, he could have cited that Universal Healthcare Coverage – as is present in all of the other western democracies – would eliminate all costs to companies regarding healthcare and his plan for a single payer option was given up during the bipartisan talks he chaired during the drafting of the bill.

But does not think he is worth $1.43 a year, per American.  As part of his rally against spending money that is borrowed from China (who actually only own about 8% of the debt) Governor Romney declared that he would get rid of programs he did not consider worth going into arrears for – specifying funding for PBS as one of these areas.  Without even arguing the case for PBS – which as well as Sesame Street, provides the only news on television worth watching, outside of The Daily Show – the idea that cutting this expenditure would have any impact on either the budget deficit or the Federal Debt is laughable.  In 2012, spending by the Federal Government was budgeted at around $3.59 trillion, of which $445 million was designated to PBS – a total of 0.012%.  If Romney really believes that he can make any positive impact on the economy by making this cut – which would drastically reduce PBS’ ability to make quality news and children’s programming that is respected and loved by many – then he may wish to pay off the rest of America’s debt by collecting all of the coins that have been thrown into the nation’s fountains.

The Argument Of Federalism vs States’ Rights Goes On

Since the drafting of the Constitution, the balance of power between the Federal Government and the individual states has been an issue that has been argued about in the US.  Disagreement on the issue led to the feud between Alexander Hamilton and Aaron Burr, which resulted in the Vice President (Burr) killing the former Secretary of the Treasury.  Last night, Romney and Obama sparred (more cordially) about the issue, with the former Governor of Massachusetts claiming that both Medicare and the education system could be run more efficiently if it was done by the state; while the President recognised the importance of operating at a local level, but also advocated the need for national policies in both areas.  With Republicans holding the position of Governor in 29 of the 50 states, it is perhaps no surprise that their candidate would be advocating more control should be given to them.

Mitt Romney is not out of this race

Prior to the debate yesterday, President Obama had leads in the swing states of Iowa, Wisconsin, Colorado, Nevada, New Hampshire, Ohio, Virginia and Florida – states that, if he carried, would take him to 332 Electoral College Votes and a landslide victory for a second term.  However, last night he did not perform that well – he looked down and made notes for the entire time that Governor Romney was talking, failed to make any impact on a policy front and appeared to be avoiding making any mistakes, rather than pushing forth his own views or going on the offensive.

Neither candidate actually participated in a meaningful debate, both just repeating talking points regardless of what his opponent said – although Obama did have a nice line that Romney’s tax plan of the last 18 months had been converted into “never mind”.  Earlier in the week a news report had stated that the former Governor of Massachusetts had been preparing some “zingers” for the debate, practicing on staff for the last few weeks.  One of those came when Romney told the President that he was “entitled to his own plane and house, but not his own facts” – which was a line he actually stole from Senator Harry Reid, who used a very similar put down to a Republican Congressman during the healthcare debate.  Another was more disrespectful, comparing Obama’s continued mentioning of a $5 trillion tax cut to the childish behaviour of his five sons, repeating something in an attempt to make it true – when he could have aligned it with the practices of Fox News.  Romney also failed to show proper deference when he referred to Joe Biden as “your running mate”, when he should have said “the Vice President”.

The next debate will be between Biden and Romney’s running mate, Congressman Paul Ryan, which takes place next Thursday.  The odds are on the Republicans enjoying another victory in that encounter, since Ryan is a more skilled debater than the Vice President and, during his RNC speech, showed he will not be beholden to the truth when he wishes to make a point.