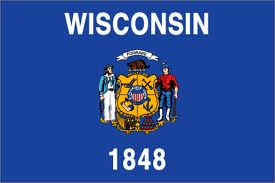 When Europeans first went to Wisconsin in the 17th century, the area was inhabited by Native Americans from tribes including the Ho-Chunk, Ojibwa, Fox and Sac.  The first explorer from the Old World known to have set foot in Wisconsin was the Frenchman, Jean Nicolet, who had been sent by Samuel de Champlain – Governor of the New France colony – to find a water route to China through North America. During the next century, the region was colonized by the French, though they were mostly interested in it for the trading of furs and established no permanent settlements.  Following defeat in the Seven Years’ War, the French handed over Wisconsin to the British, who then ceded it to the United States in the Treaty of Paris, which ended the Revolutionary War in 1783.

America initially organised the region into the Northwest Territory and it was later shifted to the Indiana, Illinois and Michigan Territories in turn, before an 1836 Act of Congress created the Wisconsin Territory.  After Native Americans – who had suffered defeat in the Black Hawk War that was fought in and around the region –  were forced via treaties to move west of the Mississippi River, settlers were encouraged to move into the south-western portion of Wisconsin – that the tribes had previously inhabited – to mine for lead.  Many expert miners came from Cornwall in England and it was from these immigrants that the state got its nickname, since the lack of shelter in the winter forced them to burrow into the hillsides and live in tunnels, like badgers.  During the 1840s, three rival settlements were vying with each other to be the biggest in Wisconsin but, in 1846, Juneautown, Kilbourntown and Walker’s Point joined to get to form the city of Milwaukee, which is still the largest city in the state.    On May 29th, 1848, Wisconsin became the 30th state to join the Union and the last that was entirely east of the Mississippi River.  During the Civil War, the state remained loyal to the Union and provided more than 90,000 soldiers to the cause, but no battles were fought there.

Initially, Wisconsin farmers focused on cultivating wheat, but after chinch bugs had destroyed much of the crop in the 1860s, the agricultural focus of the state became dairy-farming – in which it currently ranks first in the US for cheese production and second for milk and butter.  The state is also the nation’s top provider of cranberries and ginseng, as well as producing oats, potatoes, carrots and cherries.  Outside of agriculture, Wisconsin’s economy also has large manufacturing and tourism sectors, ranks 1st in the US in making paper and has several breweries, including Pabst and Miller.  Milwaukee is also home to the Harley-Davidson Motor Company.

With more than 5.7 million residents, Wisconsin ranks 20th in population in the USA and is the 23rd biggest state in terms of area.  The University of Wisconsin-Maidson is the oldest state college in the country, while the Republican Party was founded in Ripon in 1854.  No President or Vice President to this point has been born in the state, with Republican VP candidate Paul Ryan having the opportunity to change that this November.  Wisconsin is home to three “Big Four” sports teams: the Green Bay Packers (NFL); Milwaukee Brewers (MLB) and Milwaukee Bucks (NBA).

The only Republican to have won Wisconsin in a Presidential election in the last forty years was Ronald Reagan, who claimed victory there in both 1980 and 1984.  Despite President Obama having won there with a near 14% advantage of Senator McCain in 2008, it is considered in play this time around, partly because Wisconsin native, Paul Ryan, is the Vice Presidential candidate on the Republican ticket, increasing their support in the state.  Losing Wisconsin would be more damaging to Obama’s chances than his rivals, as it is considered to be a state that leans in his direction and is not one that Romney must carry in order to win the Presidency.

Congress: There is one Senate Election in Wisconsin this year, with incumbent Senator Herb Kohl (D) standing down after four terms in office.  The race between the Democratic Party’s Tammy Baldwin – currently a Congresswoman for the state – and the Republican former Governor of Wisconsin, Tommy Thompson, is considered to be a toss-up, with the latest polls showing Baldwin having a slight lead.  As a close race, both parties are focusing strongly on it as they try to gain control of the Senate heading into the new session.

The state has 8 seats in the House of Representatives and the current delegation is made up of 3 Democrats and 5 Republicans, but Rep. Sean Duffy in the 7th district is expected to lose his seat to the GOP candidate, Pat Kreitlow, which would make the ratio 2:6.