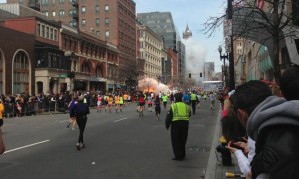 Monday April 15th – Patriots Day in Massachusetts, a state holiday when most people are off work, had started brightly in the city of Boston. The Red Sox played a morning game at Fenway Park and won in the ninth inning – with all of the players wearing number 42 to celebrate Jackie Robinson Day – also today- in Major League Baseball. The marathon, run every year on this Monday, was in full swing and the elite runners crossed the finish line at around 1pm local time, while the pack continued to slog their way around one of the toughest courses over 26.2 miles. However, as the race clock was approaching 4 hours and 10 minutes, the priority of crossing the finish line suddenly became irrelevant, as two bombs exploded, killing at least 3 people – including an 8-year old boy – and injuring more than 130.

To say that running a marathon is hard is trite – of course dragging your body around 26.2 miles by foot is a feat of endurance, no matter how long it takes – but if your aim is just to complete the race, it is within most people’s capabilities. I have completed five of them, with times ranging from a respectable – but far from quick – 4hrs19 mins 57 seconds, to a struggle of 5hrs8mins around the New York course, a month after I suffered an ankle injury playing football. Something happens to me anywhere between miles 18 to 24 where I shut down mentally and/or physically and am unable to push myself to achieve the time goals I have set for myself, which from my first marathon in 2004 has been to break the four hour barrier. Nevertheless, on all five occasions I have gotten myself to the finish line, taken my medal and been disappointed by my time, while being pleased that it is over and money has been raised for charity.

What I have never experienced, is the exhiliration of achieving a different goal, one that many of my fellow running friends have managed – qualifying for Boston. There is something reverential about the way that distance runners talk about that marathon – just naming the city as your aim explains what your goal is – you are going to run 26.2 miles fast enough to get into the Boston Marathon – which has a graded time qualification entry system based on a person’s gender and age – for me, that would mean completing the distance in 3hrs 5 mins, a pace of 7 mins 4 seconds per mile. The point of all of this is to say that the very fact that although it measures the same distance as all of the others, the Boston Marathon – which also provides a challenging, hilly course for its competitors – has a special reverential place in the running community and those were competing in it today, were more than just your average marathoners. They were more than just your average people, too – reports came from local hospitals in the city that many who had completed the event, found their way to a place where they could then donate blood to aid those who had been injured, while many runners and officials at the scene were shown running into the area where one of the bombs had exploded to provide assistance.

Once again, a senseless act of violence has claimed the lives of innocent people – including a child – and we are forced to confront the reasons that our safety feels threatened. The biggest question that the news organisations have been raising is was this domestic of foreign terrorism and, depending on the answer, different narratives will immediately be played out. If it is discovered to be a group linked to Al Qaeda, then there will be calls for the United States to seek vengeance on whichever country the perpertrators are linked to, but if it was a far-right group who carried out the attack, they will be identified as an individual or small group of people who were lone wolves, without a wider cause – they will be captured and everybody will move on. This is exactly what happened after the Oklahoma City Bombing – Timothy McVeigh was labelled as the man outside of the system who had carried out the attack, he was tried, convicted and executed and the threat was eradicated. Right? As Jeff Bridge’s character – Michael Faraday – says in Arlington Road, our security is returned because we know the name of the man (domestic or foreign, I can guarantee it will have been a man or men who carried out this attack).

On the O’Reilly Factor on Fox News tonight, host Bill O’Reilly made two particular claims that I thought were reckless – he said that President Obama was wrong to call this a tragedy, since it was not a storm, but a targeted attack (the definition of the word includes crimes as well as natural disasters); and also – and more dangerously – that there is often not actually any reason why these events happen. This is an incredibly irresponsible way of looking at terrorist attacks – while you will never agree with the motivation people use to kill innocent civilians, but to dismiss them as not having any reasons at all – no matter how warped – is what allows it to happen time and again. When Al Qaeda attacked the United States on September 11th, 2001, there were specific reasons that were used to recruit people to carry out such a heinous act – specifically, the presence of American troops in Saudi Arabia, which to Muslims is a sacred land where Mecca is located; and the treatment of Palestinians. To name and identify the causes that international terrorists carry out their atrocities in the name of does not in any way provide justification for their attacks, nor should any decisions be made in order to appease these groups – you must maintain deontological beliefs and if something should happen – for example, the recognition of Palestine as an independent state – then it should be done because it is the right thing to do, not for a teleological reason like attempting to reduce terrorist attacks. Nevertheless, if you just resort to an abstract maxim such as “they hate us for our freedoms”, there is no positive road that can be taken, no attempt to reach out to the youth of a country, ethnicity or religious group would be successful, and the only logical next step would be war.

A different tact is taken in the media when a terrorist attack is domestic in nature – the lone wolf angle is played up, no underlying issue is raised like it was after September 11th – when the religion of Islam was accused as being part of the problem that led to the atrocities. Yet there has been a clear pattern between several of the most high-profile domestic terrorist attacks that have happened in the United States over the last 20 years. The siege at Waco occurred on April 19th, 1993; McVeigh planted the bomb in Oklahoma City on that same date in 1995, as he was motivated to attack what he saw as the perverse authority of the Federal Government; and although Eric Harris and Dylan Klebold carried out their massacre in Columbine High School on April 20th 1999, their original plan had been to do it the day before – they delayed for 24 hours to accumulate more ammunition – with Harris having stated his aim was to eclipse the death count that Timothy McVeigh had caused. Despite these clear links, in the general public perception, there is very rarely a link stated between the three events – each mass shooting is just a crazy individual, while a domestic terrorist is that lone wolf who has been identified and brought to justice.

The nature of modern political debate in the United States is so divisive, so bitter and acrimonious, that whenever tragedies occur, both sides will use it as a way of pushing their own cause. After Newtown, proponents of gun control pushed for more regulation of firearms, while the NRA and others on the right said that it was not an appropriate time to talk about the issue, or that an increase of the number of weapons was the solution (the mantra being that the only thing that stops a bad guy with a gun, is a good guy with a gun). But what cannot be ignored is the far-right wing in this country, the anti-government, President Obama hating “patriots”, who think that anyone who believes in providing welfare, healthcare or education to all is a communist and Anti-American – uses rhetoric that is dangerous, harmful and should not be tolerated. It is not sufficient for them to just not agree with President Obama’s policies, instead they have to push the agenda that he is trying to sabotage the country, force-feed everybody socialism, and is a Kenyan-born Islamic-Marxist-Nazi (despite the oxymoron there). People like Ted Nugent talk about shooting Hilary Clinton and President Obama and instead of facing criminal charges, are lauded by Fox News and right-wing journalists. When an event like the terrorist attack on the embassy in Libya happened last September, instead of forgetting politics and uniting as one at a time of tragedy, pundits such as Michelle Malkin and even Republican Presidential nominee Mitt Romney tried to use the atrocity against the President.

When such strong, anti-government rhetoric is common place in the political landscape, there is a serious threat that it can help stimulate the actions of people who are already mentally unbalanced. Whether the terrorists who were behind today’s bombing in Boston end up being domestic of foreign, the motivation behind their attacks should not and cannot be ignored, else we leave ourselves more vulnerable further tragedies in the future.

One thought on “The Boston Marathon Bombing”