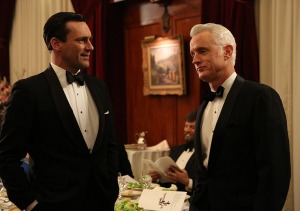 “By Monday, it will all be a dream” – Sylvia Rosen

Set on April 4th, 1968, the day that Dr. Martin Luther King Jr. was assassinated by James Earl Ray in Memphis, Tennessee, tonight’s episode of Mad Men puts its characters into a moment of American history when everything was uncertain, while they simultaneously dealt with both knowns and unknowns in their own lives.  The death of the inspirational leader of the Civil Rights Movement was another reminder to a generation that the age of innocence, when they could feel safe and secure, had ended abruptly with the shooting of President Kennedy in 1963.  Less than five years later, the US was embroiled in a prolonged conflict that many of its citizens did not believe in and were in the midst of an election campaign that would ultimately see the incumbent in the White House not have enough support within his own party to seek a second full term.  This is alluded to in The Flood as Paul Newman speaks out in support of Eugene McCarthy – who later beat President Johnson in the New Hampshire Primary, forcing him to drop out of the race – at an advertising awards ceremony, only to be interrupted by news of the murder of Dr. King.  With the perspective of history on our side, we know that things will not get any better in the ensuing months – especially from a liberal’s perspective – as Robert Kennedy is assassinated two months and two days after MLK.  Nevertheless, while the real-life events form the backdrop to the storyline on Mad Men, it is the effect they have on the characters lives that continues to take centre stage.

The most pressing concern for all is that there will be full-scale riots as a reaction to the tragedy – which did happen across the country, but were averted in New York City, something that Henry Francis’s boss, Mayor John Lindsay was given credit for – but Don is particularly concerned about the well-being of Sylvia Rosen, the neighbor with whom he has been having an affair, as she and her Doctor husband were in Washington D.C. for the weekend (the assassination took place on a Thursday night).  As Draper tries to distract himself with both work and drink, he is forced to go upstate to pick up his kids at Betty’s insistence, despite the fact he will have to drive through Harlem, where there is tension and unrest, with the children.  Being a father is not something Don has shown much interest in at the best of times, but with his mind on Sylvia’s safety, he drinks and sleeps while Megan takes care of his offspring.  However, when his latest wife takes Sally and Gene to a vigil in the park, Draper is forced to look after his other son, Bobby, who had feigned illness to avoid going with his siblings and step-mother.

Rarely have we been given the chance to see Don form any sort of bond with his sons – he did connect to a small degree with Sally last season – and, as his ex-wife is always ready to tell him, he takes any opportunity he can to get out of seeing his kids.  In order to avoid doing any parenting – but not wanting to negate the television ban that was inflicted by Betty, due to his tearing of some misaligned wallpaper – Draper takes Bobby to the movies to see Planet of the Apes, which leads to a moment where Don finally has an amazing revelation – he loves his son!  Earlier, he had witnessed socially adept Joan give the most awkward hug in history to Dawn, his African-American secretary, in an attempt to comfort her; but now Don sees Bobby show much better empathy to a cleaner at the theatre, telling him that he should watch the movie as it’s what people do when they are sad.  Draper’s conversation with Megan, where he confesses that he had to pretend to have feelings for his children and feared that his own father felt the same way about him, was a brilliant performance by Jon Hamm and showed the anguish and internal strife that the character deals with, in a large part due to his own troubled youth.  To be fair to Don, I think every new parent worries about whether or not they will be able to love their child – though for most, myself included, this evaporates the moment you see and hold your newborn baby, whereas it has taken him more than a decade to figure out he should not need to fake it.

Peggy wants to reduce the uncertainty about her own future and believes the way to do that is buy an apartment on the Upper East Side, though this will fall through when her real estate agent attempts to exploit the tension and unease in the city to get her client a better price.  As it turns out, it was not a property that will make Ms. Olson feel more secure, but the reaction of her boyfriend to the location in which she was interested.  Abe, who did not want to speak out, since it was not his money at stake, voices his concerns about them raising their kids in a neighborhood without ethnic diversity, which brings Peggy great solace, not because of geographic issues about where they live, but that he obviously sees a future for the two of them as a couple.  The viewing of the apartment did also bring a funny line in an otherwise gloomy episode, as the agent assures Peggy that the value of the property will increase when the Second Avenue subway line is completed – something that is currently scheduled to occur in December 2016 (though I can confidently say that the price will have still gone up from $28,000, even without convenient public transportation).

Pete Campbell has a very clear view of where his own relationship is going, but for him it is quite the opposite of Peggy’s, as Trudy dismisses the idea of her husband going home, even at a time when people were feeling vulnerable following a national tragedy.  While Pete does at least retain more redemptive qualities than the detestable Harry Crane – whose only thoughts about the death of Dr. King are that the continued news coverage will cost him money from loss of advertising revenue – Campbell is still left with only a food delivery man to talk to and he does not appear to understand what the accounts man says.  Meanwhile, Michael Ginsberg’s love life is revealed to be stagnant as well, as his father feels compelled to set him up on a date, perhaps for his son’s benefit, or maybe so that there will be someone around to help who can actually sew and cook to a reasonable standard.

In the political world of Henry Francis, there is no room for doubt and his experience of following Mayor Lindsay through Harlem has made him realise that he does not want to be part of somebody else’s entourage, but wishes to seek public office himself.  He assures Betty that a State Senate seat he has been offered does not require him to run, rather it is a Republican stronghold and just accepting it guarantees Henry the governmental position.  Although Mrs. Francis professes to be supportive of this move, in fact she is concerned that as the spouse of a State Senator, she will be forced to make public appearances and will be forced to confront her increased weight since the days when she was modeling or playing the role of Don Draper’s wife.   One person who was concerned about the wellbeing of Henry was Bobby, though his Dad tells him not to worry as “Henry isn’t that important.”

Finally, Mad Men has always done a good job incorporating historical events into the narrative of the show – most notably with the Bay of Pigs in Season 2 and the assassination of JFK in Season 3 – and did so once again in this episode, as, despite the proximity of Martin Luther King Jr’s murder to where this year’s story began, it was still quite a shock when the news filtered through in the middle of the awards ceremony.  In retrospect, the tableau had been set for this tragedy – as well as the quote I used at the top of this post by Sylvia, that it would all be a dream, referencing Dr. King’s most famous speech, the hour both opened and closed with images of a main character (Peggy and Don respectively) overlooking, or on a balcony, the place where the Civil Rights leader was murdered.

Keep up to date with all posts about Television, Politics and Sport on Political Footballs by following on Twitter @politicalftball or Liking on Facebook here. All previous Mad Men posts can be found here.