Don: We’ll go back to Disneyland.  From what I remember, something amazing happened there.Megan: I made the biggest mistake of my life. 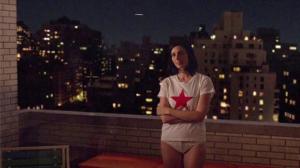 In last week’s review, I suggested that Megan Draper appeared to be doomed as her words were often drowned out by sirens, which I believed to be a foreshadowing of her murder by the end of this season, set in the particularly volatile year of 1968.  A few days later, Grantland published an article about another conspiracy theory that was projecting Megan’s death, as she had been dressed to resemble Sharon Tate, a woman who was murdered by followers of Charles Manson in 1969, but after tonight’s episode, I am sure that many more people will be convinced about the dubious future of the current Mrs. Draper.

On a trip to California in late August 1968 – the episode is set at the time of the Democratic National Convention, when anti-war protestors in Chicago were met with what was described in the Walker Report as a “police riot” – Don falls into a swimming pool and has a dream/near-death experience in which he meets both Megan, who tells him she is pregnant, and PFC Dinkins, the officer whose lighter he had ended up with after drinking with him at a bar in the season premiere.  Dinkins describes himself as being dead and tells Dick – who has shed his skin and tells a woman in this vision that Don is not his name – that he should see how he looks and Draper then stands over a swimming pool, witnessing his own body faced down in the water.  Roger Sterling dives in and resuscitates Don, but the warning signs for Megan’s own well-being remain: that dream sequence; the quote referenced above, where she (jokingly) describes agreeing to marry Draper as the biggest mistake of her life; and her telling her husband to go for a swim since it always makes him feel better, when in fact it nearly results in his death.

In the final season of The Sopranos – on which Mad Men creator, Matthew Weiner, worked – Tony is shot by his uncle and while in a coma, he sees himself in California, being called by another name (Kevin Finnerty) and there is foreshadowing of his eventual death at Holsten’s diner (spoiler alert, but some people still do not actually believe he was killed – which I guess means they never watched The Godfather) including him saying that dark spots on his brain are a “death sentence”.  When he awakens, Tony believes he has been given a second chance and initially changes his ways, but this does not last and his those dark parts of his mind are not overcome, resulting in him being shot.  In the same way, in Don’s dream sequence, Megan tells him that the pregnancy is a “second chance” and perhaps the message is that if he can change his philandering ways, there is a chance is wife will be saved, but all of the past behavior of Draper suggests this is very unlikely to happen.  At the end of the episode, having not been back to his apartment upon his return from California, Don asks Dawn to get his wife on the phone – a strange line for the show to have put in there given that we never hear that conversation and perhaps one that predicts that some time soon, Draper will reach out to Megan, but it will be too late and she will be far beyond his reach.

The purpose of the trip to Los Angeles for Don, Roger and Harry was to meet with three potential clients, Sunkist, Carnation and “avocado people” (as described by Sterling), none of whom come on board, but the fact that he had established those connections bodes well for the partner chances of Crane.  During their visit to Carnation, one of the partners – neither of whom are a big fan of corporate types from New York and they allow their distaste to be known – chides Roger for saying that Nixon is a patriot, instead citing Ronald “Dutchy” Reagan as one; while the other predicts that events surrounding the DNC will signal the end of the Democratic Party and, although he is wrong about their lack of future, they will occupy the White House for just one term of the next six. 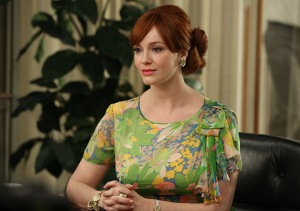 Back in New York, Joan is set up by her friend Kate with Andy Hayes, an executive at Avon who is seeking a new advertising agency to help revive lagging sales, though she initially thinks she is on a date.  Upon realizing that she has the opportunity to secure business for the company in a much more respectable way than she did with Jaguar, Ms. Harris quickly finds her feet and attempts to act like an accounts person, even going against her instincts by picking up the check for the dinner with a potential client.  When Joan brings the new connection to Peggy, she finds herself in front of first Ted Chaough, then Pete Campbell, who are quickly making arrangements for a meeting without her, though Campbell – who last week Ms. Harris recognized as being the only person there who had never broken a promise to her – assures her that she will still get all of the credit.  Not satisfied with this pledge, Joan cuts Pete out of the loop and sets up a breakfast meeting with just herself, Peggy and the Avon executive, which leads to Ms. Olson chastising her for jeopardizing potential business just because she wanted to prove that she be of value without sleeping with a client.  Nevertheless, it is Peggy who helps extricate Joan from the wrath of Campbell when he discovers her deception and it is the speaker in Ms. Harris’s office that proves that, so long as Avon is happy, internal politics at the agency will be of secondary importance.

While Roger, Don and Harry Crane are in California, Jim Cutler sets about trying to assert CGC’s dominance over the machinations of the new agency, a move that is in part brought on by insubordination from Michael Ginsberg, who calls him a Nazi and a fascist when he had talked about work rather than been concerned about the rejection of the anti-war platform at the Democratic National Convention.  Cutler’s plan is achieved in part by Ted Chaough’s visit to Detroit, where he manages to get Chevrolet to finally accept their strategy and move forward to the next level, while he also sabotages Roger Sterling’s account of Manischewitz by sending Bob Benson with Ginsberg for the meeting with them – rather than going himself – and the wine manufacturer puts the agency on review.  In order to distract them from this bad news – although Sterling admits that it had been coming for months anyway – Chaough and Cutler agree to forego their own names in the branding of the new company and suggest that henceforth they should be known as “Sterling Cooper and Partners”, finally ending the staff having to answer the phone by saying “Sterling, Cooper, Draper, Pryce, Cutler, Gleason and Chaough”, as well as avoiding difficult conversations for Pete Campbell when he hands somebody his business card.  Phew.