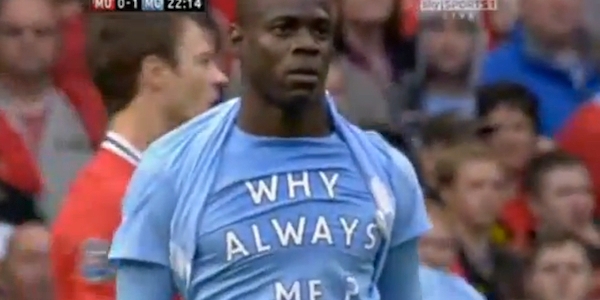 In the Manchester derby on Sunday, City thrashed United 6-1 – with David Silva pulling the strings in the midfield and grabbing the headlines with two goals and a tongue-in-cheek t-shirt.  Sir Alex Ferguson would have done well to put on some Bob Dylan after the match to heed a warning:

Come gather ’round Fergie
Wherever you roam
And admit that Man City
Around you has grown
And accept it that soon
You’ll be fearing Blue Moon
If United to you
Is worth savin’
Then you better start winnin’
Or you’ll sink like a stone
For the times they are a-changin’.

Was this result evidence of a significant shift in power towards the blue half of Manchester, or just a freak result that will be

looked back on at the end of the season as little more than a blip in another title run for United?  It has happened before: during the 2008/2009 season Manchester United lost 4-1 to Liverpool; in 1999/2000 Chelsea beat them 5-0; and the 1996/7 campaign saw them lose 5-0 to Newcastle and 6-3 by Southampton – all of these thrashings came in seasons in which United won the title.  More evidence that the scoreline does not reflect a major change, is that City were playing against 10 men for almost half of the game, as Jonny Evans was sent off in the 47th minute, and scored three of their goals in the final few minutes, when United were forced to chase the game and left themselves exposed in defence.  Also, their six goals were scored with just seven shots on target in the whole game, suggesting they were clinical rather than dominant.  But the table shows that nearly a quarter of the way through the campaign, City are top, 5 points clear of the reigning champions and have won all but one of their nine games thus far, scoring 33 goals in the process.  If United are going to win the league again this year, they will need other teams in the division to start getting positive results against their cross-city rivals.

The North London rivalry is another case where the more successful team from recent years, Arsenal, is trailing their neighbours in the league – as Tottenham are three points above them, with a game in hand.  Spurs have recovered well from their tough start to the season, losing their first two games to the Manchester clubs, and have won five and drawn one of their six games since then, including a win in the North London derby.  As their scheduled opening match against Everton was cancelled due to the riots in August, they have played a game less than the teams above them, yet trail Chelsea in third by just three points.  Emmanuel Adebayor has made a promising start to his time at White Hart Lane and has shown himself to be a good foil for both Jermain Defoe and Rafael Van der Vaart up front.  Tottenham’s upcoming fixtures (QPR, @ Fulham, Villa, Bolton, @West Brom) are all winnable and give them an excellent opportunity to build on this strong start and push for a Champions League place for next season.

In West London, it had been a while since Queens Park Rangers and Chelsea had met in the league, as QPR had been in the lower divisions since 1996, but the two sides met at Loftus Road last weekend and again the underdog prevailed.  Chelsea had two men sent off in the first half and were a goal down from a penalty conceded by defender, and part-time Sideshow Bob impersonator, David Luiz.  Their attempted comeback in the second half fell short due to some fantastic saves from Rangers’ keeper, Paddy Kenny, coupled with some poor finishing.  All of this action has been overshadowed since the game, as the focus has been on John Terry, who is alleged to have racially abused QPR defender Anton Ferdinand.

This video appears to show him calling someone (not in the shot) a “f***ing black c***” – although for the record I am not a lip-reading expert, so you can decide for yourself.  However, Terry does have previous cases of such behaviour – in 2006, he was sent off against Tottenham after he allegedly told Ledley King to “shut up you lippy black monkey” – though it was covered up by the media and the reason for the then England Captain being sent off was never disclosed (I was 11 rows away from the incident in the Paxton Road end, the reaction of the players around him spoke volumes – since then I have never supported the England team because of John Terry).  There are other incidents that show his unsavoury personality : the weekend after the September 11th terrorist attacks in 2001, Terry and his Chelsea teammates, Frank Lampard and Jody Morris, were fined two weeks wages after they had been mocking American tourists in a hotel bar near Heathrow Airport.  And, of course, there was the story two years ago of him cheating on his wife, and mother of his children, with (his club and country teammate) Wayne Bridge’s girlfriend.

If the enquiry into this latest incident proves Terry racially abused Anton Ferdinand, Chelsea and England should drop him from their sides and show that this sort of behaviour would not be tolerated.  I am sure that football issues, rather than ethical ones, will prevail and, if he is considered good enough, he will continued to be selected.  So join me, an Englishman, and support Spain, Germany, France and every other team that is not England, in the 2012 European Championships.