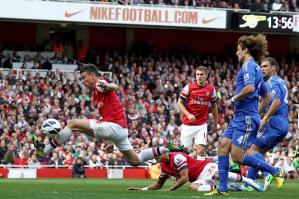 Last Saturday, Chelsea won away at Arsenal to maintain their three-point lead at the top of the Premiership and in the process, sent the Gunners to their first defeat of the season.  Fernando Torres had opened the scoring on 20 minutes, but just before the interval, Gervinho hit an unstoppable equaliser on the turn from 12 yards out.  Eight minutes into the second-half, the home side went behind again, this time after a Juan Mata free kick was diverted into his own net by Laurent Koscielny – who had been the hero for Arsenal the week before, when he scored the goal that secured a point against Manchester City.  Petr Cech was in fine form to keep Chelsea in the lead, denying Podolski and Giroud with good saves, yet the French striker should have made it 2-2 in injury time, but only succeeded in finding the side netting after he had rounded the Czech goalkeeper.  The victory made it five wins and a draw for Roberto DiMatteo’s side in their opening six league encounters of the season.

Everton continued their own impressive start to the season with a 3-1 victory over newly promoted Southampton at Goodison Park.  The Saints managed to take the lead inside six minutes through their record signing, Gaston Ramirez, however, the Toffees then struck three times in thirteen first-half minutes.  Two goals from Nikica Jelavic and one from Leon Osman secured the points for the home side and David Moyes has seen his team make their best start to the season since the 2004-5 season, when they went on to finish fourth and qualified for the Champions League.

The Manchester clubs had contrasting fortunes against London opposition.  City fell behind away at Fulham after Mladen Petric converted a highly disputed penalty, but strikes from Aguero in the 43rd minute, and a later winner from substitute, Eden Dzeko, insured Roberto Mancini’s men came away from a match they had dominated with a victory.  In the Saturday evening kick-off, United lost at home against Tottenham for the first time in 23 years – a game that I covered in more detail here – and have now lost two of their opening six fixtures for the third time in the Premiership era.  Their fans should not lose too much hope though – on the other occasions that has happened, they went on to win the title.

Elsewhere, for the second season in succession, Luis Suarez scored a hat-trick away at Norwich and his goals led Liverpool to their first league win under Brendan Rodgers, the final score was 5-2 to the Reds; Swansea lost their third consecutive Premiership encounter, as they fell 2-0 on their trip to Stoke, with Peter Crouch grabbing both for the home team; and Sunderland, who had drawn their opening four fixtures, got their first victory of the season by beating Wigan 1-0 in the North-East.  It ended all-square in the Midlands derby on Sunday, with Aston Villa getting a point thanks to a goal from substitute Darren Bent, in their home match with West Brom; Reading were denied their initial win of the campaign against Newcastle, as Demba Ba equalised twice for the visitors – though the second appeared to strike his arm – and the game finished in a 2-2 draw; nevertheless, that point did move the Royals off the bottom of the table ahead of Queens Park Rangers, and Mark Hughes’ side remained there when they lost 2-1 to West Ham at Loftus Road on Monday night.

There was also European action this week and the Champions League games saw Manchester United come from behind to beat CFR Cluj-Napoca in Romania, Robin Van Persie scored both of the goals for Sir Alex Ferguson’s men; Gervinho, Podolski and Ramsey all found the net in Arsenal’s 3-1 routine home win over Olympiakos; Chelsea won 4-0 in Denmark against Nordsjaelland; and Manchester City grabbed a barely deserved point through a Mario Balotelli penalty in their home match with Borussia Dortmund, though it was goalkeeper, Joe Hart, who earned all the plaudits for his performance.  Scotland’s representative in the competition, Celtic, gained an impressive 3-2 victory in Russia against Spartak Moscow, though they were helped by the home side being reduced to 10 men for the final 30 minutes.  In the Europa League, Panathinaikos came from behind to earn a 1-1 draw against Spurs in Greece; Liverpool lost at Anfield in European competition for the first time since 2009, as Udinese won 3-2; and Newcastle beat Bordeaux 3-0 at St. James’s Park.

This weekend sees a London derby between West Ham and Arsenal; Manchester United have a tricky away trip to Newcastle; Tottenham host Aston Villa; Sunderland return to the Etihad to face Manchester City, after being the only side to have taken points off the champions there last season; Chelsea entertain Norwich; and Everton travel to Wigan.  Bottom of the table QPR have an away day at West Brom; Southampton play Fulham at St. Mary’s; Liverpool will hope to secure back-to-back league wins in their game with Stoke; and Reading head to South Wales to take on Swansea.

Swansea vs Reading – Away win

Southampton vs Fulham – Away win

Newcastle vs Manchester United – Away win

One thought on “This week in: English Football – Chelsea stay Top, Everton in Second”