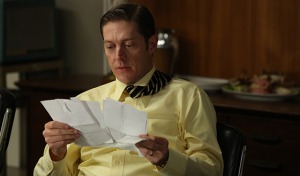 Tonight’s episode of Mad Men was all about people being put into a position where they were forced to confront the past while looking to the future and, in some instances, choose between the two.  The prime example of that came in the opening scene, as Peggy is called into a meeting to help determine whether Ted or Don’s idea should be used for the pitch to Fleischmann’s margarine.  When Ms. Olson is unwilling to opt for one over the other, she earns a tongue-lashing from Don, who tells her that he will look over her work and give an educated opinion, as that is what professionals do and that she should try it some time. Despite this, it is Peggy’s newest mentor, Ted, who really gets under her skin, as he tells her that, despite it being a cliche, he is in love with her and every look and touch they exchanged distracted him from giving the pitch to the client, but says that nothing can happen between them since they both have someone else.

However, Olson’s relationship with Abe sours as he reveals his disdain for her after he is stabbed twice – first as he was getting off the subway by assailants he refuses to describe to the police, then accidentally by Peggy, who has fashioned a homemade bayonet to protect herself from potential home invaders, but the blade ends up in her boyfriend’s stomach – and they break up after he tells her that “your activities are offensive to my every waking moment”.  Thinking that her new single status will come as good news to Ted, Peggy is surprised when Chaough – whose previous vulnerability has evaporated now that Fleischmann’s liked his campaign idea – merely tells her that he is sad to hear the relationship ended and is sure that she will find somebody else.

Now that his affair with Sylvia Rosen has ended and Peggy is more interested in impressing Ted, Don is also looking for somebody else and finds it in the form of his ex-wife, Betty.  The former Mrs Draper – who has lost weight and is back to dressing fashionably and attending fundraisers with her new husband, Henry, who enjoys other men looking at her – runs into Don at a gas station as they make their way to their son Bobby’s camp and, after playing happy families and singing songs at lunch together, the former spouses end up flirting over a late drink and sleep together once more (actually, twice).  Nevertheless, the reunion will only be brief, as the following morning Betty sits happily with Henry at breakfast, showing no remorse for the night before when she had told Don that she pities Megan, since she has no idea that loving him is the worst way to get to him.

One way that the new Mrs. Draper may begin to understand her husband is through her work on a soap opera, since she now portrays sisters Corinne and Collete – playing two roles is something that will be very familiar to Don Draper/Dick Whitman.  However, all that the added work brings to Megan is stress over how to separate the characters and make them different enough, a concern that leads her to inviting round her co-star, Arlene, for a drink while Don is away.  Earlier in the season, Arlene and her husband, Mel, had propositioned the Drapers and that should have made Megan more aware this time around, since her co-star mistakes loneliness for desire and attempts to kiss her on three occasions.  What is perhaps more concerning for Megan is that several times throughout this episode – and I seem to remember it happening earlier in the season is well – her talking was drowned out by sirens.  This year’s storyline has been set with the backdrop of crime and discontent on the streets of New York, as well as talk of similar problems in Paris and Prague, not to mention the assassinations of Martin Luther King Jr and Senator Robert Kennedy, and it seems as though the show is leading us towards the murder of Mrs. Draper before the end of this season.

Elsewhere, Pete’s career arc has been on a downward spiral since the merger of the still unnamed agency, and a meeting with a headhunter – Duck Phillips, who used to work for Sterling Cooper – confirms that his options are limited, since the only opening that is suggested is with a client in Wichita, Kansas.  What Campbell does have now is an ally in the form of Joan, who listens to his problems and then finds a solution for one of them – Pete’s need for a nurse for his mother – and finds a solution thanks to Bob Benson, with whom she is now in a relationship.  That new pairing comes as a blow to Roger Sterling, who is interested in rekindling his own affair with Joan, but she rebukes him and says that is unfair on her son Kevin and that she would rather have him believe that his father is a war hero every day, than the truth of it being the accounts man.

One thought on “Mad Men Season 6 Episode 9: The Better Half”